Emperor of the Sea Slot Review

In our Emperor of the Sea online slot review, you are transported to the Dragon Emperor's Kingdom, which has an Asian feel, in pursuit of riches and success. The Emperor of the Sea online slot may not have a lot of additional features, but it is still a well-designed game with a good free spins round and simple controls. Join us as we put this slot machine under the microscope and discover what makes this oriental title tick.

The Emperor of the Sea game online is a Chinese-themed slot with 5 reels and 88 paylines from famous developer Microgaming. Although the design is simple, the Emperor of the Sea slot UK has some intriguing bonus elements such as stacked wild wins and a free spins feature in which winning symbols are swapped with new combinations and more wilds! This Asian-themed game, which features the Dragon Emperor, has simple visuals and symbols on the reels that include playing cards (A, K, Q, J, 10, and 9) as well as ships, koi carp, tortoises, money pots, and the Dragon Emperor. In both the regular game and the Free Spins feature, the Emperor of the Sea emblem acts as the wild, appearing stacked on all reels.

The theoretical RTP (return to player) of the Emperor of the Sea online slot is 96% which is bang on the current market average, and it has a medium volatility rating making it accessible to a wide variety of players. 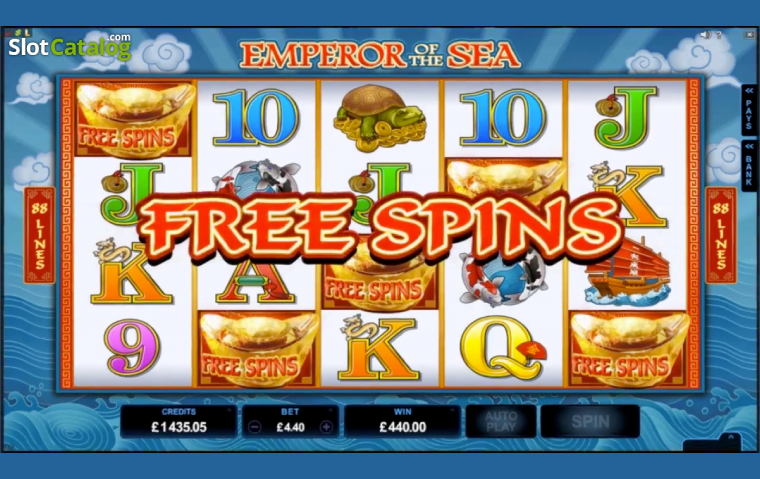 The Emperor of the Sea slot logo is the game's wild symbol, and it may substitute for all other symbols except the scatter to form winning combinations. It can also appear as a stacked symbol on the reels.

Three or more of the scatter symbol, which resembles a golden hat, in any reel position inside a single game awards Emperor of the Sea free spins. During the free spins round, players are offered 8 free spins and several features become available.

Players are awarded stacked wilds that increase by one with each spin to help them stack up.

All wins from the free spins symbols are also susceptible to 'rolling reels,' which are similar to cascading reels in other slots and can result in a chain reaction of several wins from a single winning spin.

How To Play Emperor of the Sea Slot 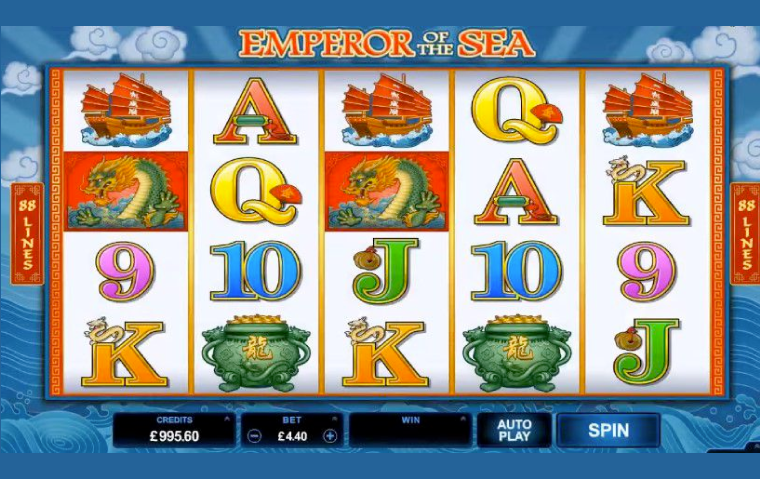 To begin playing the Emperor of the Sea slot game load this title at Prime slots. This can be done on any device of your choosing. Next, you’ll need to set your stake amount before playing the Emperor of the Sea casino slot. This is accomplished by selecting the 'bet' button. You'll see a dropdown menu where you may customize your bet. Players must choose the size (or value) of the coins they want to wager, as well as the number of coins they want to risk each line. Because the Emperor of the Sea slot features 88 paylines, your wager can be pretty substantial, but bets are still extremely inexpensive for beginner and casual gamers when playing at the lower end of the settings.

When you're satisfied with your settings and your wager amount just press the spin button to get started. After this, the reels will spin and stop at random. When a player hits three or more matching symbols across a pay line (starting from the left-most reel), they’ll win a prize payout. The paytable determines how much you are paid.

While it won’t win any prizes for unique features, the Emperor of the Sea slot machine is an excellent example of the Chinese luck-themed slot machine genre. The game was created with quality above quantity in mind, as seen by the well-designed symbols and excellent UI. While the free spins round isn't revolutionary, the bonus round is enhanced by the rolling reels and stacked wilds and can lead to some pretty nice payouts. You can play this slot at Prime Slots on any device you like including on the go via the Emperor of the Sea mobile slot. Sign up and play today to discover more.