Visually, Finn and the Swirly Spin transports you to a mystical land teeming with leprechauns.  With a magical theme, you will see the leprechaun Finn below the reels. Spades, hearts, 4-leaf clovers, lucky horseshoes, acorns, and rubies are among the symbols on the reels. The latter is the most rewarding, paying out 50 times your bet for five on a payline. The star is the wild symbol, and it can be used to replace all other symbols except the key Scatter. 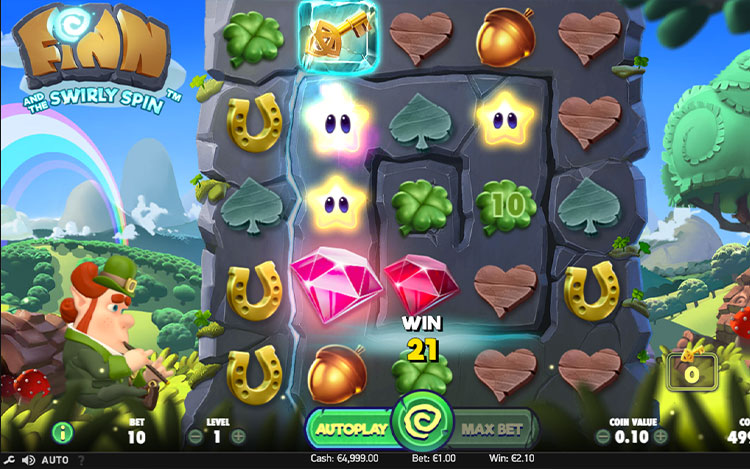 The Finn and the Swirly Spins Bonus Slot are random can be activated at any time during the game and are divided into four categories:

It's worth noting that these features are unpredictable so you can't plan on triggering them.

How To Play Finn and the Swirly Spin 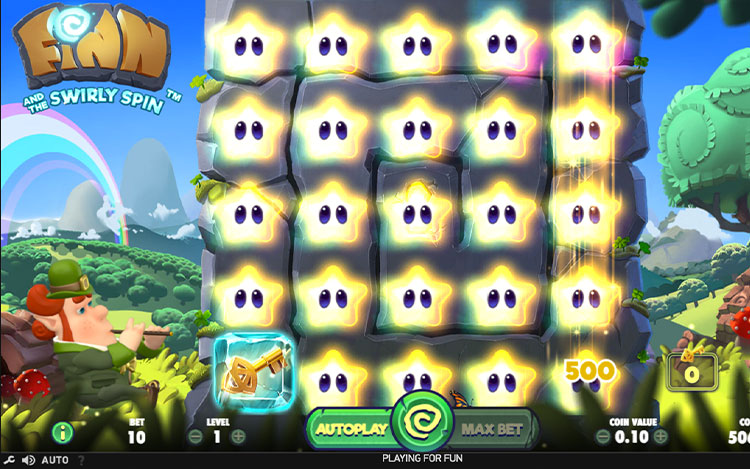 This Finn and the Swirly Spin slot is the first of its kind, as the symbols do not fall from above, as they do in other 5 grid slots. Instead, the reels slowly rotate from the bottom left corner to the center, creating wins whenever three or more symbols appear on a horizontal or vertical line.

The game also includes a sticky Wild, represented by the golden W coin; however, this appears only during the Lava Lair free spins game. This symbol cannot be removed, and it lacks the ability to remove other symbols in the same way that a normal Wild does.

Another thing to keep an eye out for is the Free spins key, which is represented by an ice cube. The free spins symbol will always appear in the bottom left panel of the reels and will progress around the spiral reels as you play. Once the key has made its way to the central panel, you can activate Free Spins.

When a Free Spins game is triggered, the total number of keys displayed in the key meter does not decrease. Initially, only one game is available; however, after a certain number of rounds, more keys will become available. This means you'll get more free spins, but there's a catch: the free spins are unlocked in a specific order, beginning with Star Bar and ending with Golden Pot.