The Genie Jackpots Megaways slot UK has 6 reels and a Megaways feature. The number of symbols that appear on each reel changes with each spin. This has an impact on the number of winning combinations. If all 5 reels have the maximum number of symbols, there are 15,625 Megaways possible. Per spin, you can bet anywhere from 0.10 and 100. The  Genie Jackpots Megaways online slot has an RTP of 96.52 %, which is higher than the market. The Genie Jackpot Megaways slot machine has a moderate to high level of volatility, with a maximum possible win of 10,000 times your bet. The highest-paying symbols in Genie Jackpot Megaways mobile slot are the Genie Wild, Genie Jackpots, Treasure Chest, Turban, and Scimitars. The low-end symbols are the usual Ace, King, Queen, Jack, Ten, and Nine.

Multiways pays slots are quite different to payline slots. Instead of matching symbols on a clearly indicated winning line, Megaways slots pay off when three or more symbols appear on neighbouring reels. Wins pay from left to right, beginning with the leftmost reel, and only count as a winning combination if the symbols appear on consecutive reels.

When it comes to the paytable, Genie Jackpots Megaways is more traditional, with upper and lower symbols clearly separated. When you land symbols on all six reels, the 9, 10, and J all pay a 0.5x multiplier, while the Q, K, and A pay a 1x multiplier for a full house. 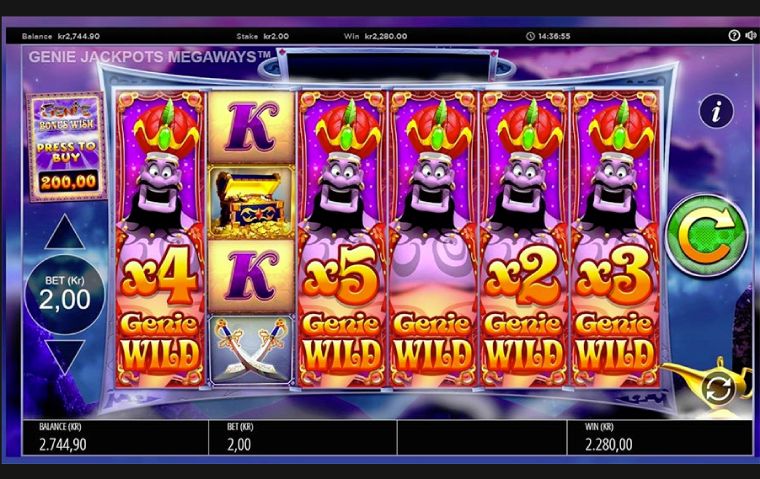 This slot has a ton of features. The Genie Power Spin can appear on any spin in the base game. This allows you to earn from one of four randomly presented spin modifiers.

How To Play Genie Jackpots Megaways 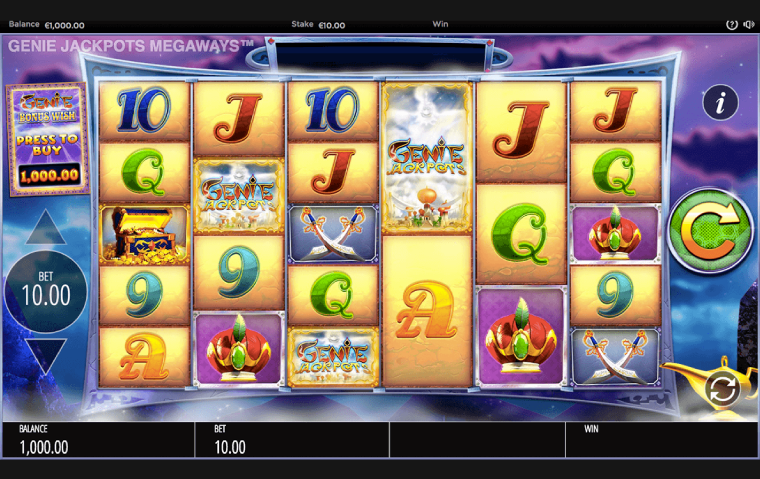 First thing you normally do is set your bet. Before you do, we always recommend that you check the paytable. This is always a good review for older players and a worthwhile read for new players to understand it better. To change your stake between.10 and 10 coins, use the up and down arrows next to the Play button.

Genie Jackpot Megaways online slot is a straight forward game. It is loaded with features and bonuses. BluePrint gaming maximised the theme as well as the Megaways system combining all of that created a unique slot experience. The many features will keep new players interested and engage during their playing time. High rollers can still be interested because of the maximum win.