The Slingo Deal or No Deal slot  has a traditional 5x5 grid with each number displayed on the banker's famous red boxes. Slingo  Deal or No Deal Online Slot is a popular online slot game based on the popular TV show. This highly successful slot machine incorporates many of the show's mechanics. There are 12 paylines available on the Slingo Deal or No Deal slot machine. The RTP is 95%, which is a tad lower than the market rate. Each round, you can place a bet ranging from 0.50 to 100, making it suitable for both casual and high-rollers. In this medium variance slot and bingo hybrid game, you can win up to 5,000x your stake.

Slingo Deal or No Deal Casino Slot features the show's iconic numbered red boxes. At the start of the game, you will be asked to select a lucky box, which will be set aside while the remaining 25 boxes are filled into the grid. There are a few characters from previous Slingo games who can help you score winning combos. When the Joker in the red hat appears on the reel, he can allow you to check any box in the column above him, allowing you to complete Slingos and earn more prizes. 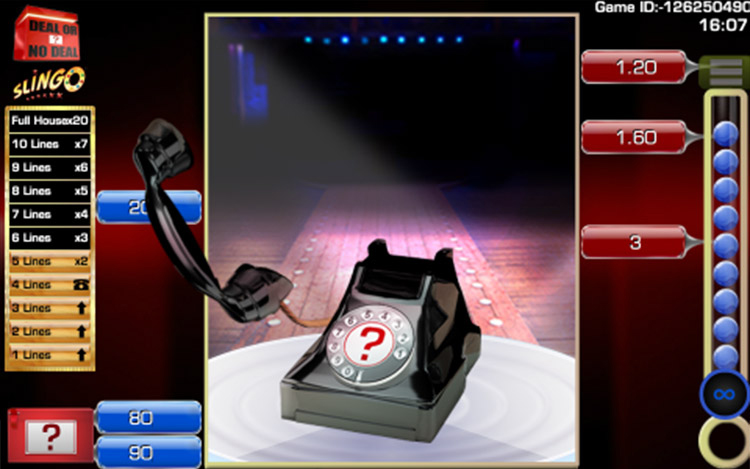 How To Play Slingo Deal or No Deal 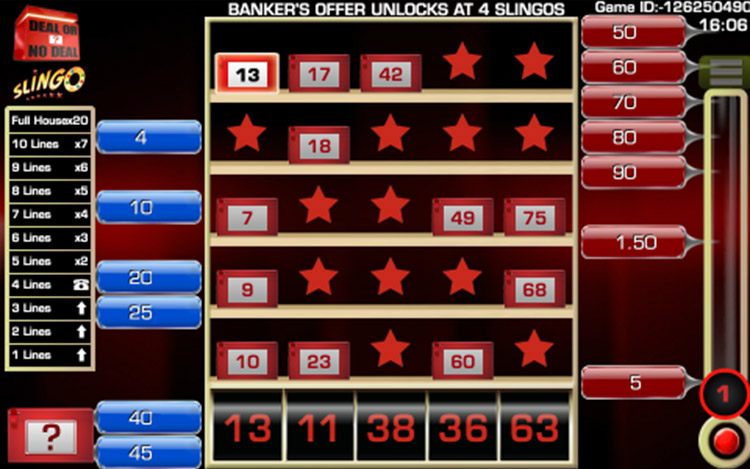 It may take a minute to learn to play Slingo Deal or No Deal Slot. Begin by selecting your stake using the +/- buttons on the stake tab on the left, then select one of the 26 boxes presented to you. While the other 25 boxes fill the 5x5 grid, your box will be set aside.

You start by pressing the green 'SPIN' button on the right. Each of your first ten spins will place five numbers/symbols in the reel beneath your grid. We found on our Slingo Deal or No Deal Slot Machine review that if any of the numbered boxes in the columns above match the number below it on the reel, that box will be opened and its prize value removed from the game. Five opened boxes next to each other (vertically, horizontally or diagonally) creates a Slingo, and each completed Slingo moves you up a place on the prize multiplier bar to the left of your screen.

Once you've completed four Slingos you'll unlock the Banker's Offer and be given three choices:

If you select ‘SPIN’ the Banker will make an offer only after each spin and based on the prize values left in the game.

If you mark off all possible Slingos and get a Full House you can get up to a 20x multiplier.

After your first 10 spins, you will be able to carry on playing if you accumulated any Free Spins or by buying extra spins, the unique cost of which is displayed on the spin button for each individual spin.

If you have seen the show or constantly follow it the Slingo Deal or No Deal slot has the same feel. The graphics are excellent and capture the colour and sound of the game. It is a modern slot with some complexity however, it is not too hard to understand for new players whether you have seen the show or not. We absolutely recommend this slot for new players and returning ones alike.