Starburst slot machine by NetEnt is one of the most popular games at online casinos all over the world. The bejewelled outerspace-themed eslot is a beguiling mix of vibrant colours and the frenetic arcade energy that has proved irresistible for seasoned and new players alike. This Starburst slot review will take a look at the game’s special technical features, it’s one, but extraordinary, bonus feature. Keep on reading to get to know Starburst casino slot and why it’s worth checking out, if you haven’t already.

Starburst slot uk is a five-reel, 10 payline game that can be played across all devices including desktop and mobile. Starburst feels like an arcade game by design and it’s entirely based on Starburst Wilds. These Wilds only appear on the three middle reels. They can expand to give up to three re-spins with wild reels to give you out-of-this-world wins. Starburst online slot sounds simple, the game has held players all over the world in its thrall.

The Starburst slot RTP is 96.09%, around the average for online slots. It has low volatility that gives you frequent, if not huge, wins. The stakes range from 0.10 to 100 and its max win is 500 times your stakes. It only has one bonus feature — the Starburst Wilds — which we’ll get into later in this Starburst slot machine review.

Starburst online slot’s visuals are beautiful and literally out-of-this-world since it’s set in outer space. The soundtrack has a distinct sci-fi vibe that perfectly complements the symbols populating the reels. The symbols include five gems in different shapes and colours, as well as a 7 sphere and the BAR sphere — which has the highest value. The most important symbol is the Starburst Wild and it only appears on the three middle reels (reels 2, 3, and 4). It will substitute for all symbols on the board to give you their corresponding payout. 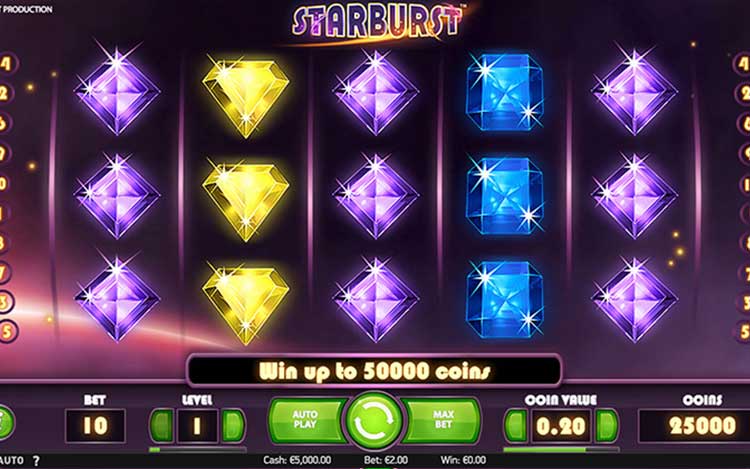 The Starburst wild only appears on reels 2, 3, and 4. When one of them lands on any of the three middle reels, it triggers the Starburst Wild feature. Then the Starburst Wild will expand over the whole reel to give you the wild reel. And this wild reel will remain stuck in position with a free re-spin. If another Starburst Wild comes up, the same thing will happen all over again. The feature only ends when there are no more new Starburst Wilds appearing anymore. Three wild reels make it easier to fill the reels with the BAR symbol, which will result in a 500 x stake payout.

How To Play Starburst 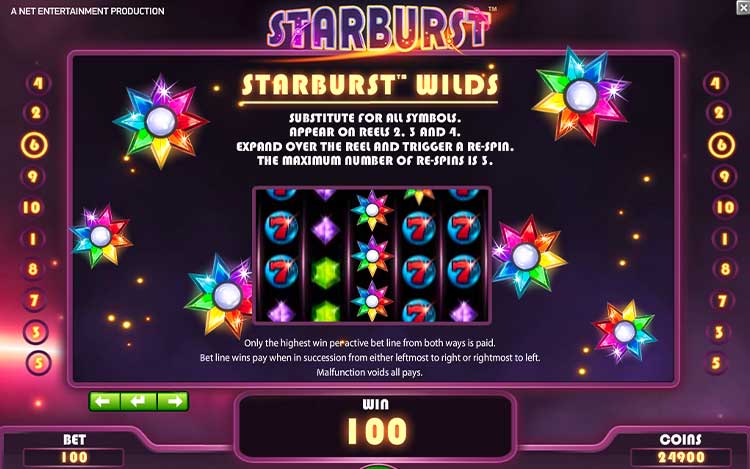 To play Starburst slot, you first set your stake. You can choose a bet level between 1 and 10. Then, set your coin value to anything between 0.01 and 1.00. This will be spread over the 10 paylines. Then, press the spin button and prepare to be dazzled by the sparkly jewels and watch for the Starburst Wilds, you’re going to want those.

Yes, Starburst mobile slot is a pretty simple game and therein lies its charm. Its mesmerising visuals has stood the test of time and it’s clearly the most popular online slot ever and it’s found in most online casinos. Many have tried to replicate Starburst, but they could never duplicate this shining star of the online slots world. Hope this Starburst online slot review helps and gets you to dive into this fantastic video slot game!