Twin Spin Mobile Slot combines the thrills of Las Vegas with the latest advanced video slot technology. Twin Spin Online Slot is a game that players will like thanks to the unique reel synchronising and linking feature that shows on every spin, as well as the 243 chances to win. Let us dive into this Twin Spin Online Slot Review.

There are 243 ways to win in the Twin Spin slot. The game has a basic layout with 5 reels and 3 rows. Classic-style symbols include bells, cherries, bars, jewels, and lucky 7s. A Wild symbol can be used to replace any other symbol and help you form winning combos. You can bet as little as 0.25 each spin and as much as 125.00 per spin. The Twin Reel feature, which is exclusive to the Twin Spin slot, connects adjacent reels with identical symbols and can expand to cover all five reels. The RTP (Return to Player) of the game is 96.60 percent, which is very good for a video slot.

Despite the lack of free spins or a bonus round, the game maintains a simple and straightforward gameplay. For those who like a faster-paced game a quick spin option is available.

Wilds can appear on all but the first reel and act as a joker, substituting for other symbols to boost your payouts.

This is the game's most noticeable feature and main attraction. The Twin Spin can occur on any two adjacent reels, and the location of the Twin Spin varies. Everything is controlled by the game's Random Number Generator, so you never know when the expanding reels will appear. As a result, each spin becomes more thrilling.

How To Play Twin Spin 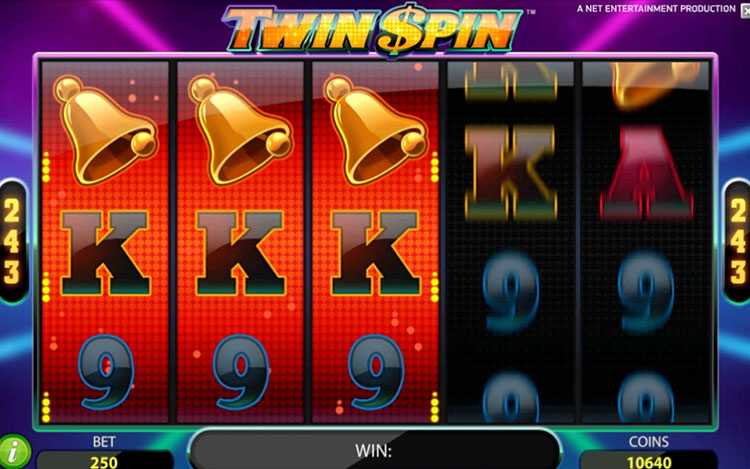 Gameplay is straightforward when you play Twin Spin Slot. The controls and display area is at the bottom part of the screen. We always recommend that you check the information about the game. Tap on the I icon at the lower left of the screen. This will introduce you to the paytable as well the game rules and features in the event that you missed them at the beginning of the game. The bet is a fixed value however, you can change the levels and the coin value to your liking. The game has a unique system called Twin Reels. Each symbol has a corresponding value. There are no Twin Spin Slot bonus rounds or elaborate themes in the Twin Spin slot UK. Twin Spin Slot Machine is designed to appear like a land-based casino slot; it is simple to play. The Diamond is the most valuable symbol, paying out 1,000 coins for five of a type. Consider what would happen if all five reels landed with identical symbols, all of which were Diamonds. In that situation, a single spin may result in a windfall of 270,000 coins. Five of a type on the Lucky Seven pays 500 coins, while five Bells on neighbouring reels pays 400 coins. The RTP of Twin Spin is 96.6 percent. Press on the Spin icon on the middle of the screen to start.

Neon lights and bright colours is what the Twin Spin Casino Slot looks like aesthetically. Our Twin Spin Slot Review begins with the game design. The graphics are excellent and simple. The cherry symbol is one of the classic symbols as well as bells, bars and lucky 7’s. The diamond symbol has the highest payout, as 5 on a payline wins you 1000 coins. A Wild can appear on reel 2, 3, 4 and 5, and increase your winning chances. The main feature of the game is included in every spin, and that is the twin reels feature, which also has the potential of expanding and taking over all the reels. It does not give you complex ways to win but it has a good number of them, 243 to be exact. The Twin Spins Slot main highlight is the Twin Reel which helps you win more. The maths on this game is great with a mid to high volatility and higher than average RTP of 96.60 percent. Our Twin Spin Slot review concludes with this, the game is exciting and fast paced.