Why Slingo Rainbow Riches Is Anything But Your Ordinary Slot Game

You will get more than just the typical slot experience with Slingo Rainbow Riches, and that is why it’s such a big hit among players. Slingo Rainbow Riches remains the top Slingo choice for its thrilling and fun gameplay. It takes you on an adventure-filled journey chasing the pot of gold at the end of the rainbow.

If you’re not familiar with Slingo, it is the revolutionary creation that fused bingo and slots together. To play it, players must complete lines and coveralls on the board that resemble a bingo card. Other popular Slingo games include Slingo Riches, Slingo Centurion, and Slingo Monopoly.

Gaming Realms partnered with Scientific Games in marrying Rainbow Riches, and Slingo, and that’s how Slingo Rainbow Riches came to be. It has all the same features that people love about the game, but with a Slingo touch to boot!

As many of you may know, Rainbow Riches is one of the classic slots that has paved its way from casinos to online gaming. It’s loved for not just its colourful Irish theme, but also because of the fact that it’s a bonus round haven. Millions of players play the exhilarating slot game weekly.

Slingo adds a fun twist to the exhilarating classic. The well-loved game got even more exciting as it fuses with the world of bingo. Now players will have more fun chasing the pot of gold at the end of the rainbow!

The Game’s Lively Colors and Theme

Slingo Rainbow Riches is well-loved for its unique gameplay, and stunning visual. The game is Irish-themed, and yes, when there’s a pot of gold, expect to see some delightful leprechauns.

Enjoy splendid rainbows, sceneries, and pots of gold in vibrant colours. Its 20-payline reel is set on a beautiful, lush green landscape. You will also see a mountain silhouetted in the background, and colourful plants, flowers, and toadstools to complete. It is dazzling with colourful graphics on the main game and bonus rounds. On top of that, it has a bouncy soundtrack that makes gaming more enjoyable.

More than just its vibrant theme, Slingo Rainbow Riches also comes bearing big win potentials. The key to big payouts is to trigger the game’s bonus rounds. The minimum amount you can bet on the game is €0.50, and the maximum amount is €200.

Slingo Rainbow Riches has an RTP of 95.6%, and the slot has a medium variance. What’s more exciting is that in this 5×5-reel game you have a chance to win a top prize of 1000x your initial bet, with the biggest win amounting to a whopping €250,988!

In Slingo Rainbow Riches you will come across several characters who each play their own unique roles. These characters serve as the game’s symbols that will either be lucky charms to you, or they can come bearing misfortunes.

The Joker that’s all smiles on the reel will help you big time. He’s the one wearing the blue top and the red clown hat. When the Joker appears, you will be able to choose any number on your grid to mark off in the row. Take note that you can only choose numbers in the same row which the symbol appeared in.

And then there are Super Jokers. He’s dressed in a green top, and green clown hat. His friendly face gives an even bigger advantage by allowing you to mark off any number on the whole grid. Yes, the WHOLE grid.

Now, it’s all fun and games until the wicked Devil symbol appears. The Devil blocks off potential matches on the grid, hindering any progress you may have made

You will come across the game’s main character Larry the Leprechaun on the Road to Riches bonus round. The bonus is triggered when you reach Larry the Leprechaun’s symbol on the bonus ladder. He will be the one spinning the wheel of fortune during the bonus, and who knows, maybe he would even rub off some luck of the Irish on you.

Slingo Rainbow Riches starts you off with 10 initial spins. But throughout the game, there’s a chance to get free spins!

For each spin, a random set of numbers are generated. Match the numbers on your reels to those that appear on the grid, Do so as if you are playing a game of bingo.

You need to mark off 5 numbers in a row to get a Slingo. You can either mark them off horizontally, vertically, or diagonally.

The game has Free Spin symbols. When a symbol appears on the reels, you get one extra spin for free! 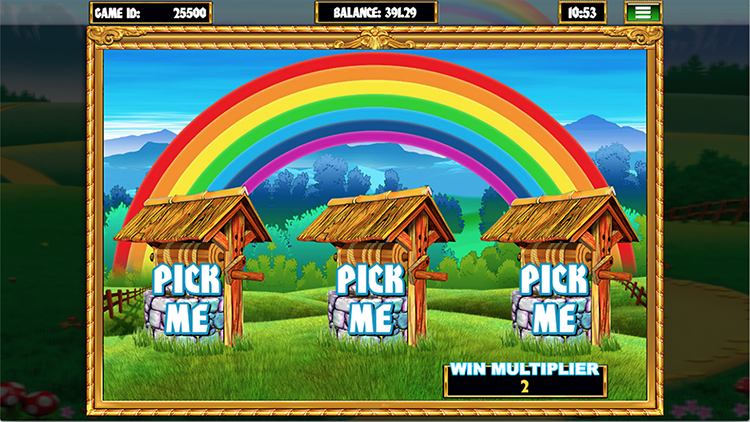 It Has 7 Bonus Games!

Now, if you still aren’t convinced to play Slingo Rainbow Riches after reading all of the stuff above, don’t fret for we have saved the best for last!

Yes, you have read that right: the game has 7 Bonus Rounds! There is a rainbow ladder on the left side of the reel. Completing Slingo lines will take you one step up the ladder until you reach a bonus round. Slingo Rainbow Riches is one Slingo adventure that you wouldn’t want to miss.

Reaching the leprechaun on the bonus ladder triggers the bonus. In the Cash Crop feature, 50 coins will spin in front of you. Each one has different multipliers behind it, and the coin that stops will show what you have won. You get the chance to win up to 10x multipliers. After this, a coin flip will decide your fate: Will you get another go, or is it time to collect what you’ve won?

The choice is in your hands! Which Magic Toadstool would you pick?
This feature is triggered when you reach the toadstool on the bonus ladder. You will have 3 choices, and the toadstools contain values of up to 5x multipliers or a fairy. Each fairy gives you 3 more multiplier values.

Reaching the toadstool framed in red leads you to the Magic Toadstool Red bonus round. During this bonus round, the same rules for Magic Toadstool apply except you get to choose 4 toadstools this time. This gives you an extra chance for bigger wins!

The leprechaun in a gold frame triggers this feature. Reach it on the bonus ladder and spin the lucky wheel with the leprechaun. On the wheels are the number of steps you can take along the golden trail. You can take 1 to 6 steps. On the Road To Riches, there are multipliers valuing from 7x up to 500x! Landing on ‘collect’ gets you your prize from your current position.

The next step up the ladder takes you to this bonus round. In Road To Riches Red, the same rules from Road to Riches are applied, only this time the multipliers’ values are doubled. In this round, you can get from 14x up to 1000x multipliers! This is your road to bigger wins!

Reaching the top of the bonus ladder takes you to the pot of gold… symbol. Congrats! You’ve Triggered the Pots of Gold bonus round. Here is where you get the chance to win the top prize.

In the Pots of Gold bonus round, a gold, a silver, and a bronze pot will start to spin around. The one that comes to a halt will be your prize. The pots come with multipliers that vary from 50x to 1000x!

In Slingo Rainbow Riches, there’s plenty of enjoyment to go around. The game is brimming with fun graphics in vivid colors, but it’s more than what meets the eye. With tons of features to aim for, and not to mention the chance to fantastic wins, It’s definitely a Slingo experience like no other!

Have Fun with The Wish Master Slot

What Do Players Love Most About Online Slots?
Follow us on